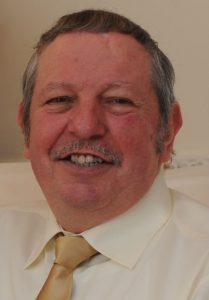 Allan John Lewis was born in the Rhondda Valley South Wales UK, a son of a coal miner, in August 1939, just before the outbreak of World War 2.

He started work underground for the National Coal Board on his fifteenth birthday. He married in March 1961 and has two children, a daughter and a son, and two grandchildren.

Deep down he always wanted to be a writer but he felt thwarted by his lack of education. He would write a few pages and give up, frustrated by spelling and grammar. (This was before the days of personal computers.) As a young man, he didn’t have much time to read or write. He was working two shifts on the coalface, and when his daughter came along he got himself another job as a part-time fireman.

By the time he was in his late forties and his two children had married, he found time to start reading again. He enjoyed the adventure novels of Wilbur Smith and the works of James Patterson and Lee Child. He loves a good crime thriller.

The pleasure he found in reading rekindled his desire to write.

He would create stories in his head but did not put pen to paper in earnest until he retired.

Then with the help and encouragement of his son he worked on five action novels to a first draft stage.

Get Out of My Dreams is his sixth novel and the first he has brought to publication. Allan has four more thrillers in the JOE THE MAGIC MAN SERIES that will be out soon.