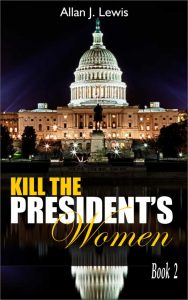 In January 2013, a bloody gun battle at the Algerian B.P. gas plant in the Sahara desert claims the lives of 40 workers and 39 Islamist militants after a three-day siege.

After undergoing specialized training by an al-Qaeda affiliate in Afghanistan, the two eldest sons of one of the slain militants receive their mother’s blessing to avenge their father’s death and carry on his legacy: the elimination of Western women in government who speak publicly and who also blaspheme.

Deputy Director of the FBI, Frank Brubaker realizes that he is on the back foot and quickly activates a new special task force consisting of two highly trained special agents and two equally special civilians. One of the civilians – “Joe the Magic Man” – is an elusive, roguish character with a hidden identity and highly potent powers of mind reading, telepathy and hypnosis.

As the FBI struggles to come to terms with the potential destruction he could wreak with his powers, they find they have no choice but to work with him, especially because he possesses the ability to invade peoples’ dreams and extract withheld information.
The manhunt is conducted in earnest, with every passing second increasing the probability of the militants’ success in making a bold statement on American soil.

what a book kept me thinking and wondering throughout.excellent read – terrific book kept me enthralled all the way through.the worrying thing is,unless joe revealed himself to you you’d never know he was there.keeping my thoughts to myself from now on
Fabulous – This is the second book in the series. The telepathic powers are just as intriguing and scary and the plot moves on at a good pace. I really like the ways Joe comes up with to keep his identity secret. Alice is likeable and normal and some of the other characters are becoming more rounded.
The story continues… – Another story concerning Joe, The Magic Man, this time, called in to help foil a plot to kill two women who speak out against Muslim terrorists…those with a high profile and so must be stopped, according to said Muslims. There is plenty of action in this FBI thriller and characters that fit well into the plot. It is a contemporary story with a supernatural element. It is well-written and good for those who enjoy this genre.
A Very Enjoyable & Thrilling Sequel”! – This exciting book is the 2nd part of the “Joe The Magic Man” series by the author Allan J. Lewis. Just like the first one, this book is as amazing and fast-paced a thriller that will keep you gripped from start to finish. The storyline is very clear and straightforward, and besides that the story-telling is once again of a very good quality. Once more all the characters involved within this thrilling tale come all vividly to life, and the interactions between the characters in this story are very lifelike to make this book a real suspenseful read all the way through. In this story Joe The Magic Man is once again working together with Alice Timberlake, as his intermediary to keep his identity a secret, as well as together with FBI agents, Profiler Agent Rosemary Burrows, and Special Agent Ed Campbell, and this secret taskforce has been put together and remain under the supervision of Homeland Security’s Deputy Director of the FBI, Frank Brubaker. The story itself is about two terrorists bombers who hate seeing and hearing Congresswomen preaching on TV, and they have sworn to their family and believe to “Kill The President’s Women”. And so in the end it will be up to Joe with his abilities of getting into people’s dreams and hypnotizing them, and with the help of Alice Timberlake, Rosemary Burrows and Ed Campbell, to infiltrate the minds of people who help those two terrorists in an attempt to try to stop them in their effort to bomb, shoot and thus kill innocent people. Highly recommended, and so read this book because this is for sure another great supernatural action-packed story, and that’s why I would like to call this book: “A Very Enjoyable & Thrilling Sequel”!