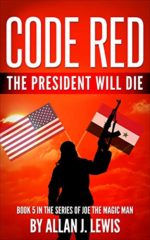 When a terrorist group sent a TV message to America, saying, that if they didn’t stop their bullying in the Middle-East, then the President Will Die as will a lot of US leaders before what they saying will be the Thanksgiving Day Murders that was only a week away. Shortly after that TV bulletin, US leader was poisoned with a nerve agent.

The entire American agencies were called in to find out who this new terrorist group was, and how they managed to poison a Senator in Washington DC. They knew the TV message was broadcast live from Syria, but, no group was coming forward to claim responsibility. All leads led to a blank with the CIA and Homeland Security, none of their sources knew who the new group was.

That’s when Frank Brubaker, the Deputy Director of the FBI, decided to put his secret task force on the case. A small force, but very effective, consisting of Special Agent Rosemary Burrows, a profiler, Special Agent Ed Campbell lead detective. And two civilians, a rogue hypnotist who goes by the name of Joe the Magic Man, who has the gift of reading the minds of criminals, and Joe’s associate Alice Timberlake a freelance journalist who acts as Joe’s go-between for Joe and the FBI.

Follow the secret task force as they track the terrorist from Syria to Turkey, to Canada and then America, with Joe finding members of the new group in each country. Can Joe find the terrorist leader before they carry out the Thanksgiving Day Murders?