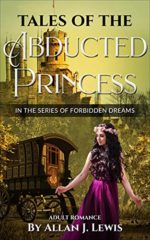 Jean is a headstrong nineteen-year-old girl that knows what she wants, and that is to marry Joe the Blacksmith, he keeps saying he is too old for her that he is old enough to be her father. But his age doesn’t worry Jean especially after she had wormed her way into his bed and found out what a good lover he was. Jean finds loads of other men to satisfy her lust as she tells Joe about them just to tease him.

Joe had promised Jean’s father he would bring Jean up as best as he could when he and his wife were handed Jean to them as a baby. Joe’s wife died and Joe struggled to bring Jean up on his own as a travelling blacksmith going from village to village in a caravan, he tried not to fall in love with Jean but he failed all too easily. Joe has a big secret to tell Jean, and he was sure she would hate him when she finds out, and the king would have him hanged for his relationship with Jean.